A firm belief in the fundamental importance of culture in our society has brought the Festival des Arts de Saint-Sauveur into the ranks of major arts and culture events staged in Quebec and the rest of Canada each year. FASS is now the largest regional dance presenter in the country, both in terms of the number of large-scale shows it presents and the size of its attendance. For nearly 30 years, the Festival has welcomed the greatest artists of dance and music on the national and international scene in the enchanting setting of the village of Saint-Sauveur.

FASS is now the largest regional dance presenter in the country, both in terms of the number of large-scale shows it presents and the size of its attendance.

The Festival’s artistic direction has been orchestrated by Guillaume Côté since 2014. His experience, along with the expertise acquired in his career as a dancer, composer and choreographer, have led him to affirm the mandate of the Festival while putting added emphasis on creation, diversity and support for Quebec artists.

Under the leadership of Etienne Lavigne as Executive Director, it has contributed actively to laying the foundations of a genuine cultural hotspot with a reputation that extends well beyond the geographical boundaries of the Laurentians.

The Festival des Arts de Saint-Sauveur is a not-for-profit organization dedicated to the discovery and presentation of the best choreographers, dancers and musicians. Through its eclectic, inclusive, accessible and original programming, the Festival seeks to support and inspire artists from Canada and around the world, and to introduce audiences to their work and passion in an intimate setting. 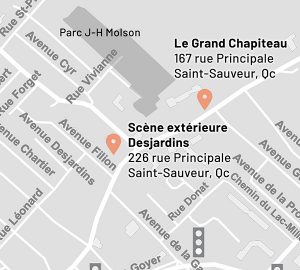